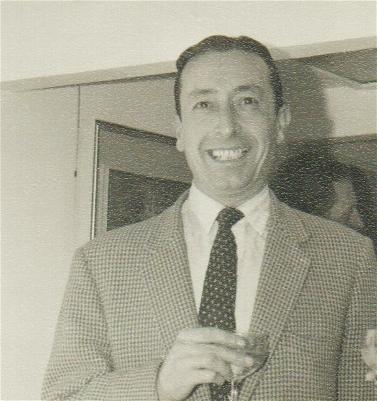 François Lanzi was born in Ajaccio, Corsica on the 5th July 1916. His young childhood was spent in Calvi, a fishing and now tourist village on the west coast. The colours of his paintings often evoke those rich ochre tones which surrounded him during his youth. Typical Mediterranean houses, built with local stone and red-tiled roofs are seen in a number of his paintings; surely happy memories of his early years depicted in those less troubled works. 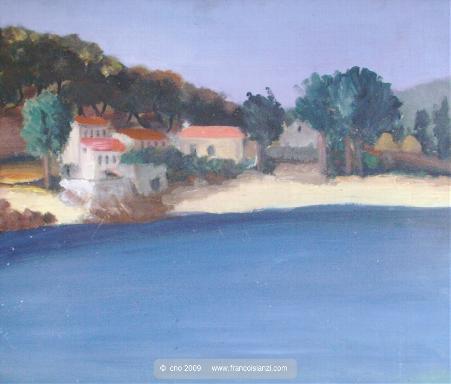 Little did he know then, despite being born during the 1st Word War, that he would suffer physically and emotionally in the horrors of a war yet to come. How his mind must have been tormented by all the atrocities seen during his capture and imprisonment from 1940. His vain attempts to escape, only led him to being transported from one camp to another, each more vile and inhumane than the one before. His refusal to work for the enemy resulted in his arm being broken. It was considered an act of resistance.During at least one of his attempts to escape, he was pursued by guard dogs and their ferocity made a lasting impression upon him. 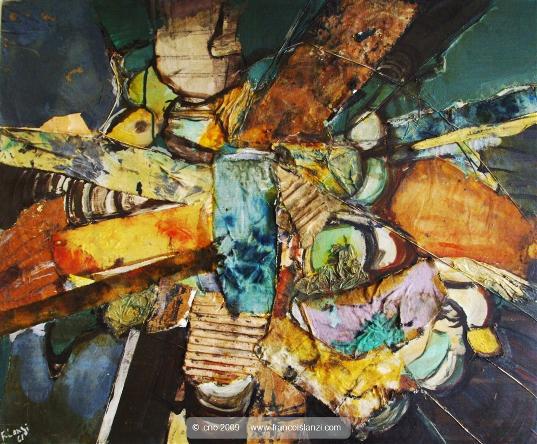 Many of his works were completed between 1960 and 1970 when the memories of his captive war years would have still been very much alive. After the war, Francois Lanzi lived in Paris, teaching and exhibiting his work. His love for his childhood island home was ever present and he would return to Calvi whenever it was possible. On one of these occasions he met an English lady (Nora Egremont-Lee) and in 1954 they were married in Kensington registry office. Unable to speak much English (Nora spoke fluent French) he found work as a framer with the company Robert Savage Ltd, on the Old Brompton Road. In addition to this work, which enabled him to frame some of his own paintings, Francois Lanzi exhibited in a number of different galleries in the UK. Some cited in his papers are the Redfern Gallery (1957), the RBA Gallery (1959,1960), the AIA Gallery (1960,1961), the Stone Gallery in Newcastle (1961) 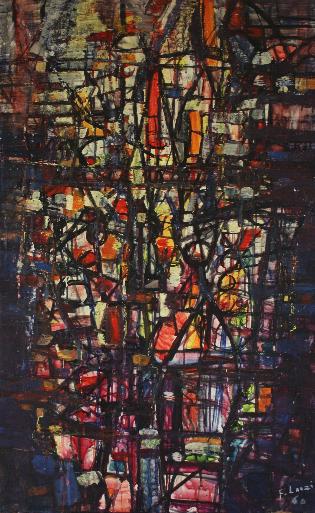 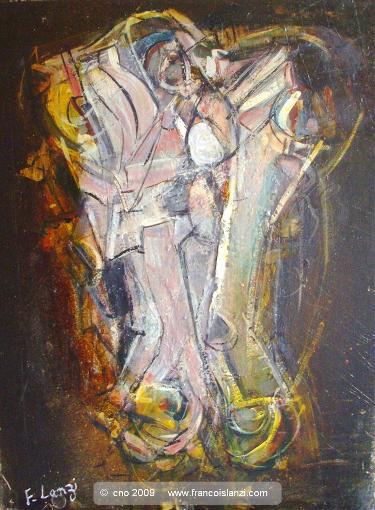 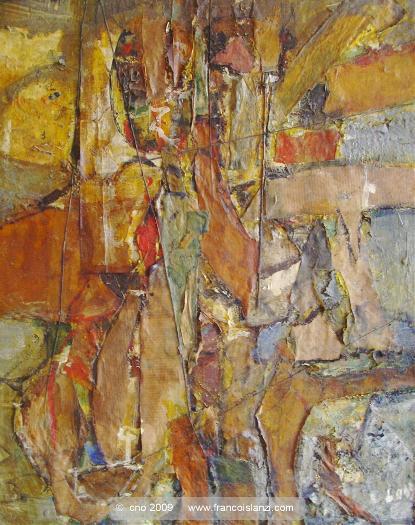 Despite being well-received by the critics (see Manchester Guardian 24/07/61), he found it difficult to continue the rhythm of his exhibitions after leaving London and moving to Chiddingfold in Surrey. His difficulty communicating in English, his distance from a major cultural centre, severely limited his social contact and he became very isolated in the Surrey countryside. He did not stop working. 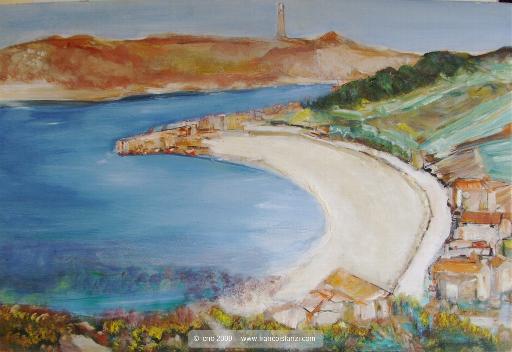 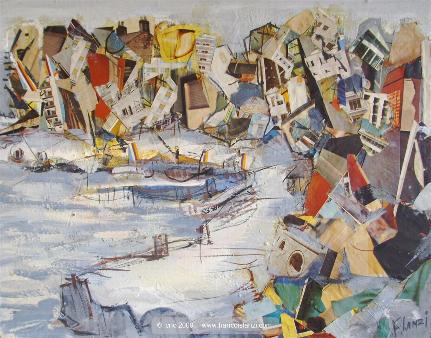 The whole character of the artist's work can be attributed, in large part, to no other cause then his almost forced hermit like existence. He lived with his wife on the second floor of a large old Victorian house. At the back, a long room was converted into a a rather dimly-lit studio, where he would often work until late in the night. 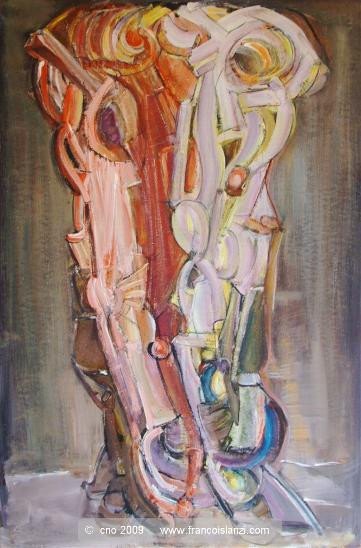 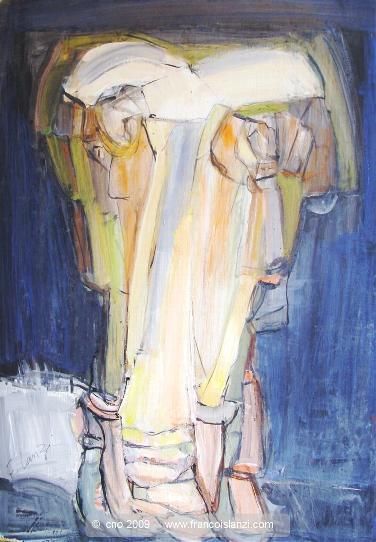 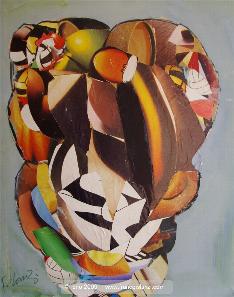 From time to time, when finances permitted, they would both travel to Francois` beloved Corsica and spend several weeks with friends and relatives. His works from the London and Chiddingfold periods can be classified into several themes. Perhaps simply they could be termed under five headings. The vast majority of his work is abstract, pure imagination, original and spontaneous. He could be classed as being one of the later abstract expressionists. 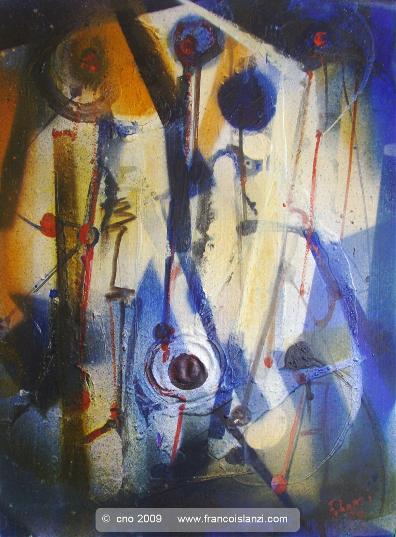 Upon superficial analysis the main themes, which repeat themselves throughout his work, can be described as: 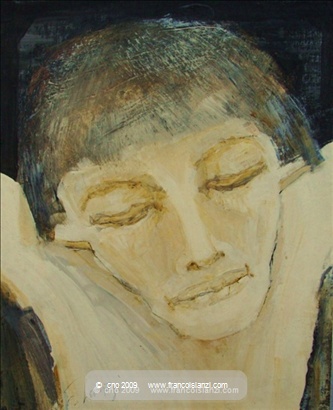 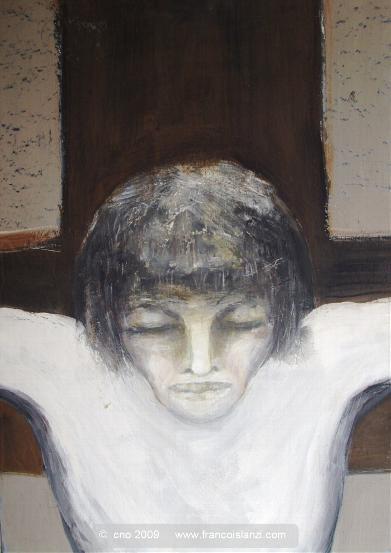 He uses many different media but in each work he strives to express freely his deepest feelings, often tormented. 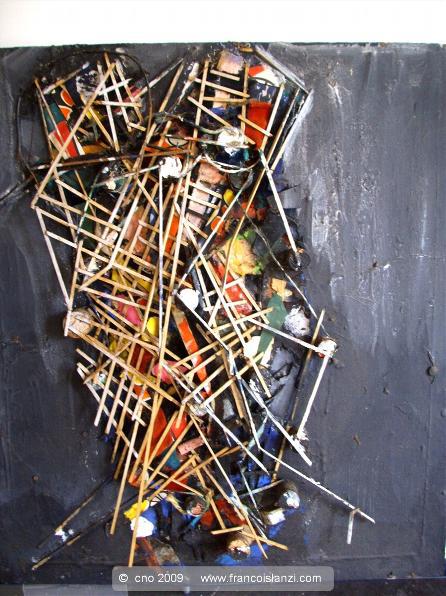 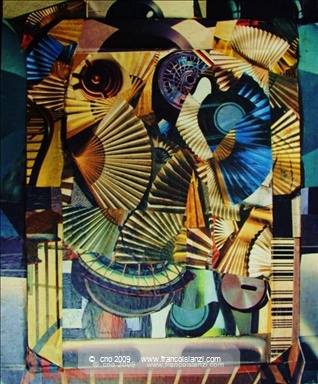 After exhibiting in Newcastle, Bernard Staniland of the Newcastle Journal wrote " But all the exhibits are pictures in which the artist is talking in his own special language and you may perhaps translate it for yourself: but only by looking. They cannot easily be described in word-language." His language was highly developed, introverted and developed to compensate his almost total lack of other more "normal' everyday forms of communication. Since Bernard Staniland saw his work in 1961, his isolation only increased. His own language developed. 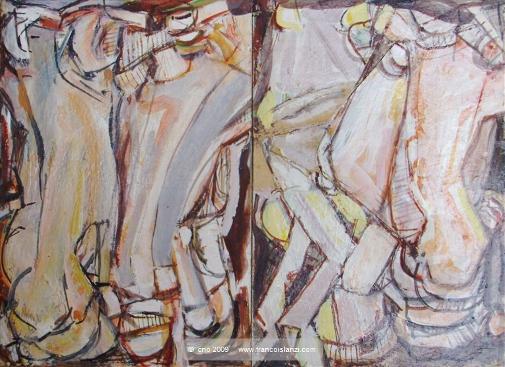 It is interesting to note that he had a Catholic upbringing and other members of his family were strongly religious and devout Catholics. His sister Clara Lanzi ( http://fr.metapedia.org/wiki/Clara_Lanzi ) was the founding member of "Secours de France" and one of his brothers Léo Preger was a talented composer of church music. His early religious schooling does perhaps explain his compulsion to create the series of Christ-like heads and stained-glass designs. 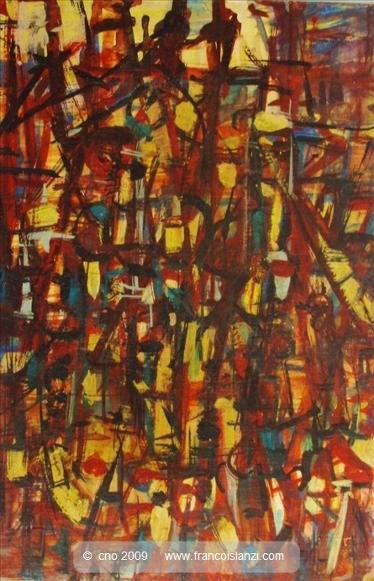 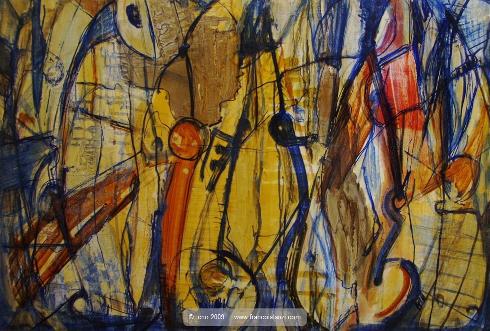 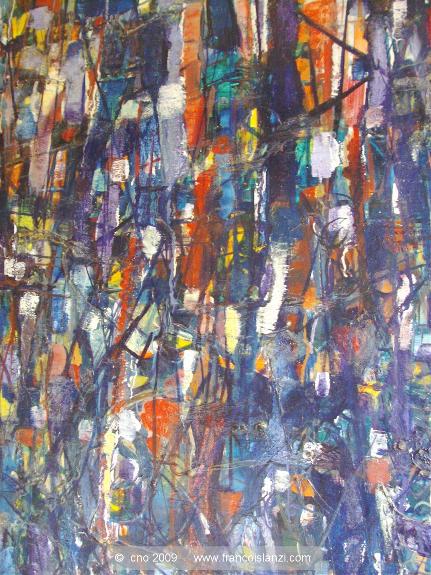 So many of these images can be seen simply as self-portraits: the head being the all-important, life force of the body. No matter how contorted and distorted the images become, they remain, recognisably, Lanzi. 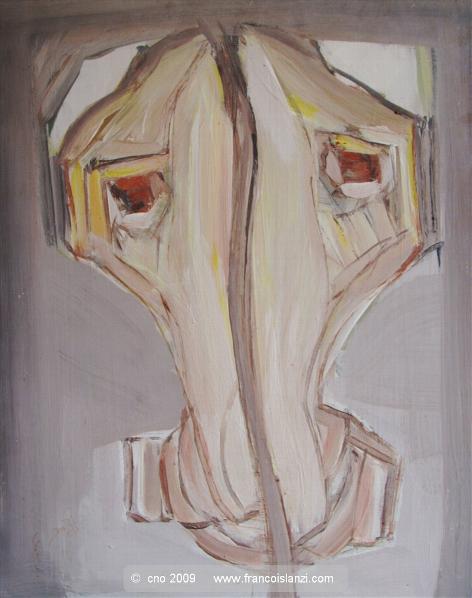 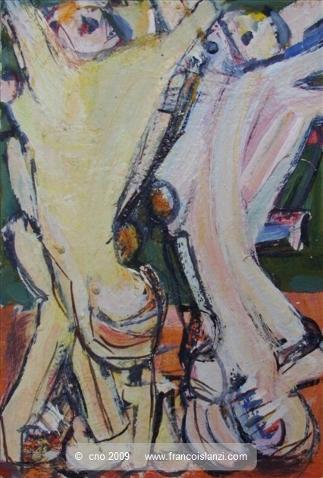 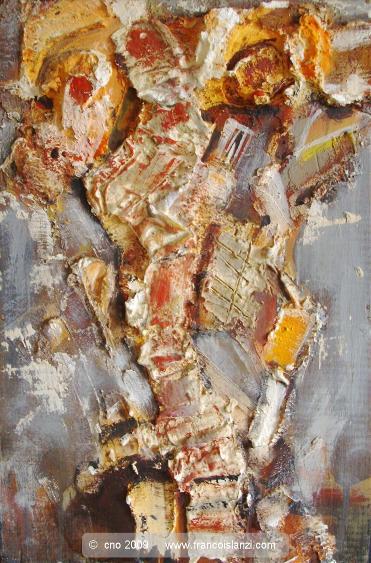 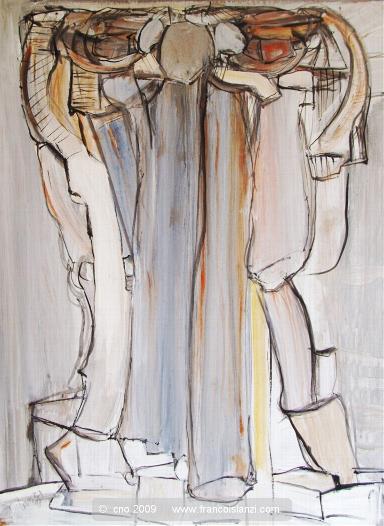 In 1994 Michael Budd of the Gallery in Knaphill gave a posthumous exhibition of François Lanzi`s work. Michael, who had met Francois, coined the phrase "the self-absorbed" to describe so fittingly François Lanzi. On the occasion of this last exhibition, George Melly ( http://en.wikipedia.org/wiki/George_Melly ), well known art critic and musician, wrote "these are not easy pictures but they are important ones. At a time when gimmicks and hype dominate so much of the art world it would be a grave injustice to ignore such intense and convincing manifestations of the human spirit" 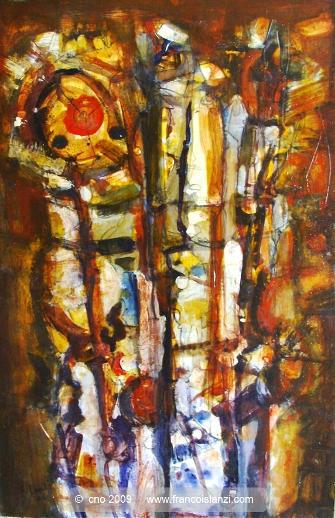 François Lanzi died in Guildford, Surrey on the 13th November 1988

Created by chris oliver 2009
Special thanks to: Nora Lanzi†, Michael† and Josephine† Budd, Annabelle and William Budd, Brian Champion, Anthony Egremont-Lee, Susan Grayer, Nicole Oliver, Pierre Preger-Lanzi and the Lanzi family, JP Masson, George Melly†, Kate Thomas, The Watts Gallery, and all those without whose help this site would not be possible.